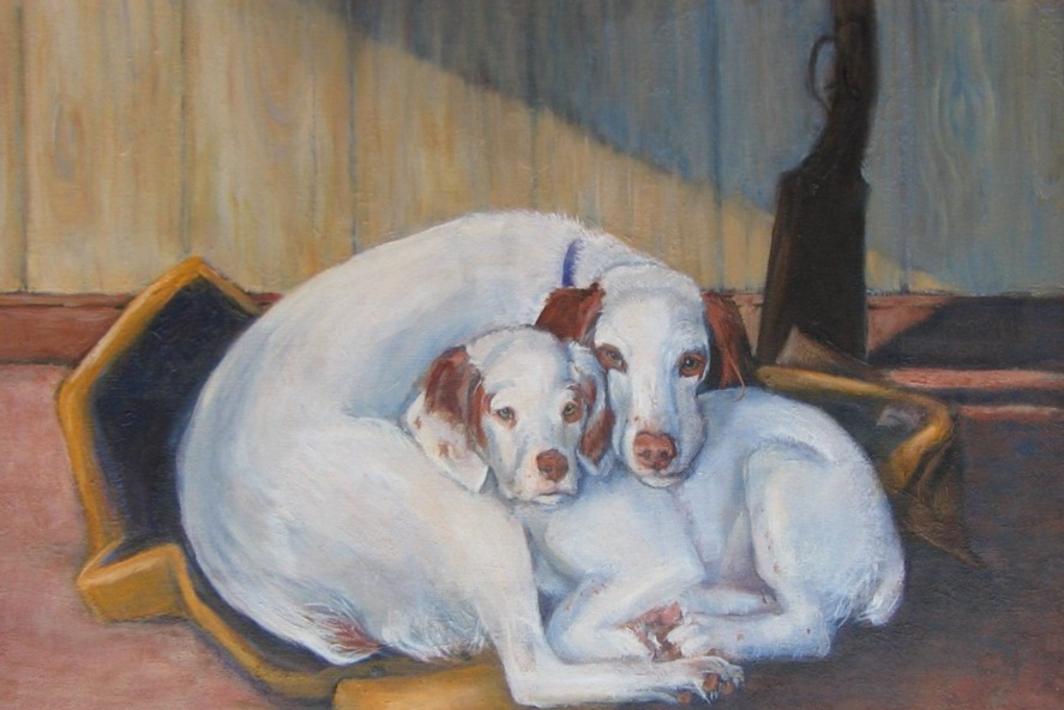 About Us
Home
About The Breed

​  It all started back in the fall of 1998. A friend of mine asked me to go bird hunting with him and I accepted the invitation. As it so happens he had a Brittany. His dog was so loveable and well behaved I was impressed right away. And after we both shot a couple birds over her I was instantly hooked and had to have one.

Rhoades Woods Sadi was born 9/19/1999. As she grew up I worked with her training her with what little knowledge of training a bird dog I had. Thank goodness she knew more about it than the trainer and basically taught herself. Life was good and as she got older she developed into a pretty good bird dog no thanks to her owner and I considered breeding her as we would like to have another Brittany. So off to the vet we went to get x-rays taken to send of to the orthopedic foundation for animals. (OFA) Well , when the OFA report came back and I opened it up my heart sank. Sadi was mildly dysplastic in her left hip.

So being unable to breed Sadi we turned to looking for another puppy. We did long nights of searching on the internet and on the phone to breeders all over the country. We finally settled on a breeder from North Carolina named Nolan Huffman of Beeline Brittany's. We got on his waiting list and Finally on 2/11/2003 we went down and picked up Rhoades Woods Lacie.

In the mean time we had scheduled Sadi for a spay surgery. The surgery took place 2/13/2003. She never came home from the vets office. She had a reaction to the anesthesia and passed away. We were devastated with the loss. So that meant we were still one Brittany short in our home.

I was messing around on the internet one night shortly after her passing and ran across the American Brittany Rescue site and I saw a dog on the Michigan page that I  really liked the looks of and showed him to the wife when she got home from work. We adopted Beemer in April of 2003. Then came Freckles. We adopted her from ABR in December of 2004.


In the fall of 2004 I sent Lacie Back down to Nolan Huffman's and had her professionally trained and in the summer of 2005 Lacie and I ran our first National Shoot to Retrieve field trial . We got our butts smoked big time but we had so much fun and the people were so helpful that we were hooked . Lacie got better every time out and before long we were making regular placements and decided she was worthy of Breeding. Again We were off to the vet for OFA x-rays and this time the report came back OFA good. So then the search was on for a suitable stud that would enhance the breeding and hopefully better the breed. We settled on Hap's Spice Rum Luke after I saw him Run in one of our NSTRA field trials. It just so happened I was judging the trial that day and was assigned to judging Luke. The dog was awesome and I knew I had found the stud dog I was looking for.

It takes a lot of time and patience and searching to put together a good breeding pair and our patience was rewarded with a great litter of pups and we kept Tasha out of the first litter. And as planned, she is looking like she is going to be even better than her mother so it appears that our goal of bettering the breed has paned out.

We don't breed often but when we do we breed for QUALITY. The Brittany breed is our passion and we will do what ever it takes to keep the breed going and that includes being part of the National Brittany Rescue and Adoption Network .

We joined rescue back in 2004 and since then have fostered and found forever homes for over 30 Brittany's that were owner surrenders to pounds or pulled off the streets as strays. It's hard work because you never know what the dog is going to be like when you bring it into your home. Some have been abused, others neglected, and still others just thrown away and left to die . But it's so rewarding when you can work with a dog and help it overcome it's fears and problems and place it in a home that will truly love and cherish their companionship.

Thanks for reading about us and visiting our page.